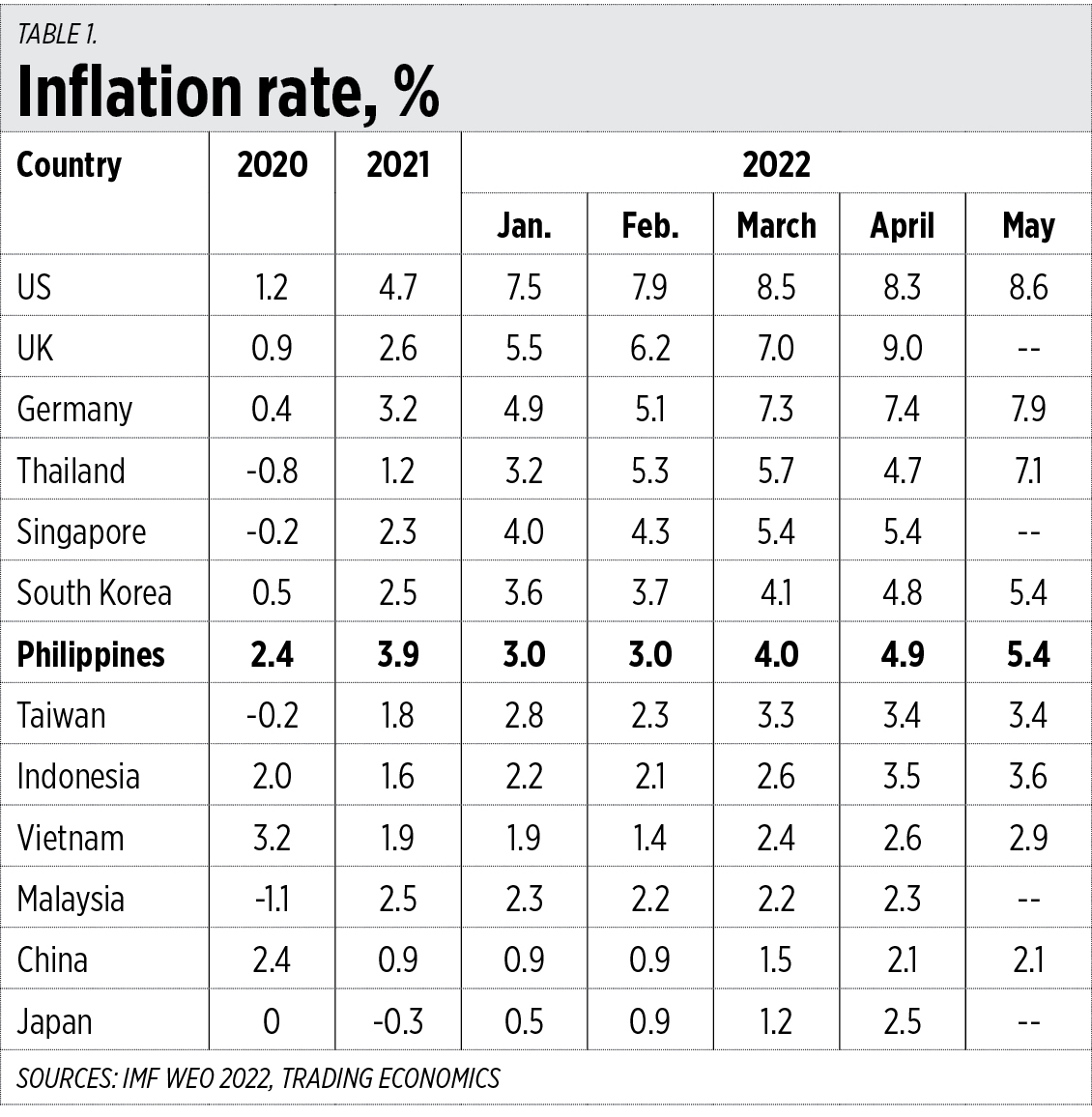 RISE INFLATION IN THE PHILIPPINES, BIDENFLATION
The Philippines saw a sharp rise in its inflation rate last month, rising from 3% in January-February to 5.4% in May. Large increases in May occurred in transport (14.6%), housing, water and electricity (6.5%) and alcoholic beverages and tobacco (6.8%).

In the United States, “bidenflation” continued to wreak havoc on ordinary American households. The US inflation rate was just 1.4% in January 2021 when Trump left the White House; it rose to 7.5% in January 2022 or 12 months into the Biden presidency and before the Russian invasion of Ukraine, and rose to 8.6% in May, the highest rate in 40 year.

Germany’s inflation of 7.9% in May was perhaps the highest in around six decades, while that of 9% in the UK in April was the highest in 40 years. The industrial economies of America and Europe are limping from high inflation (Table 1).

The West’s “war on fossil fuels” is one of the main reasons why this happened. High oil, gas and coal prices mean higher manufacturing cost and higher commercial and household electricity bills. Underinvestment in oil refining has also contributed to low fertilizer production and rising fertilizer and food prices.

CEMENT IMPORT AND CONSUMERS
I recently received many documents on “Cement Anti Dumping” presented by the Cement Manufacturers Association of the Philippines (CEMAP). They believe that cheaper imported cement, mainly from Vietnam, is bad for the economy as it negatively affects their member companies’ revenues, capacity expansion and job creation. Their argument is summarized in a report in Business world“The cement group is looking for a backup for local industrialists” (June 9).

Free trade means that consumers are the primary beneficiaries of trade. Cheaper cement, steel and other building materials mean that poor people who would otherwise have flimsy wooden or bamboo houses can have concrete houses that can better protect them against strong typhoons and flash floods, helping to save lives and property. And CEMAP thinks that’s bad, that cheaper imported cement should be penalized with high tariffs to make it more expensive for consumers. Bad lobby.

The Tariff Commission (TC) should take into account the interests of consumers and not only cement manufacturers, importers and traders. Free trade is good for consumers.

ELECTRICAL PROBLEMS
These recent reports of Business world are interesting.

3. “The Razon company is ready to control the Malampaya project” (June 3),

Report #1 is somehow good because the National Grid Corp. of the Philippines (NGCP) has a history of frequent delays in the delivery of necessary transmission lines between new power plants and distribution services. The report refers to the Mariveles line in Hermosa, Bataan, which should have been completed much earlier. And NGCP is expected to have completed the Hermosa, Bataan to San Jose, Zambales line by June 30, as the delayed transmission line chokes 818 MW of power there (GN Power Dinginin Unit 2 with 668 MW and SMC Mariveles Unit 1 with 150 MW) which can expand Luzon’s grid supply. This is still far from being the case. See Table 3 of this column on May 16 https://bit.ly/Oplas051622.

Reports 2 and 6 are linked: Meralco has no choice but to increase electricity rates because the cost of production has increased. The price of coal (Newcastle) in June was $390+ per tonne, three times higher than a year ago when it was $175+ per tonne. Even Malampaya’s domestic gas price is pegged to Dubai’s crude price and therefore also increases. Fortunately, Meralco is able to keep its distribution costs flat, with no increase since around 2015.

Reports #3 and 4 show Mr. Razon’s Prime Infra further expanding into the energy space. Its planned 2,500-3,500 MW solar power plants will have a big impact on land use competition, as it will require about 4,000-5,500 hectares of land. In addition, more intermittent renewables with priority delivery to the grid means that they can discourage further investment in coal, oil, gas and nuclear, as they are lower priority in the grid. For example, if coal and gas plants offer power at P5/kwh and solar offers at P6/kwh, the latter will always be given priority. Discouraging investments in conventional thermal power plants can lead to the threat of blackouts in the future, and this is currently happening in Europe, the United States and even Japan.

Report #5 concerns Maguindanao Electric Cooperative, Inc. (Magelco) and Lanao del Sur Electric Cooperative, Inc. (Lasureco). They owe 3.8 billion pesos and 12.9 billion pesos respectively – a total of 16.7 billion pesos – to the state-owned Power Sector Assets and Liabilities Management Corp. (PSALM). These two electricity cooperatives (ECs) could be the reason why PSALM requested 16 billion pesos in budget support for 2021 and 2022. So taxpayers from Zamboanga to Visayas to Luzon are subsidizing these ECs because they extract more “free electricity” from PSALM. Wow. This is one more reason why the National Electrification Agency (NEA) which oversees all ECs should disappear, and all ECs should become private distribution utilities, supervised and controlled by the Securities and Exchange Commission (SEC ) and not by a political agency like the NEA. .

Malampaya’s gas production is declining from 19,500 GWH in 2010 and 2020 to 18,300 GWH in 2021. The shares of geothermal and hydropower are increasing slightly and the contribution of wind-solar is not than 2.6% of total generation in 2021, still insignificant even though renewables Energy law was enacted in 2008 and feed-in tariff (FIT) or assured high prices for 20 years was granted in 2012 or ten years ago (Table 3).

I hope the Ferdinand Marcos, Jr. administration realizes that energy rationing, giving unnecessary priorities to intermittent renewables and discouraging investment in thermal power generation, will be economically counterproductive. The right energy mix must be made by consumers themselves, not by the executive or legislative branches of government, nor by environmental and climate lobby groups.