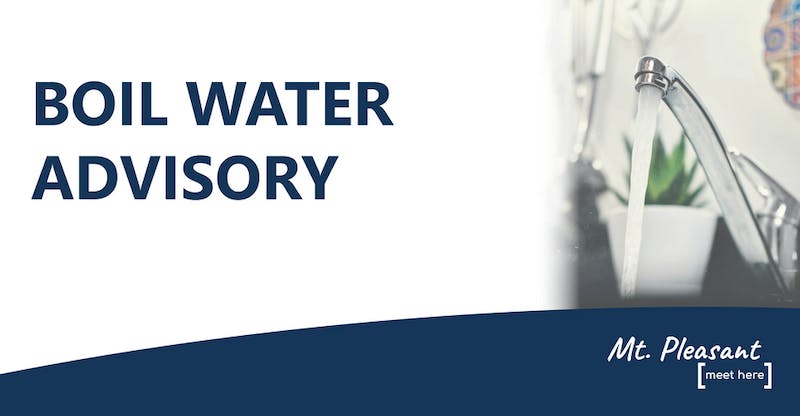 Editor’s Note: This story will be updated as new information becomes available.

The City of Mount Pleasant issued a boil water advisory “out of an abundance of caution” after high levels of turbidity were found in the water system.

According to a city press release, normal turbidity levels at the sewage treatment plant are 0.03 turbidity units. The statement said a sample taken on September 1 showed 1.99 turbidity units, nearly double the standard of 1.0 units.

The release also says turbidity – or cloudiness – has no health effects per se. Jason DeFeyter, the water superintendent for the town of Mount Pleasant, said high turbidity can mask the presence of disease-causing organisms while providing an environment for them to grow and making it more difficult for them to filter out. Chlorine and other chemicals have a harder time cleaning water when there is turbidity, he said.

The problem was caused by an error when operating the water treatment plant’s valves, DeFeyter said. Two of the filters, which use sand and anthracite, were filled with water beyond what they could handle and some of the particles entered the water supply, causing turbidity.

The breakthrough lasted about eight minutes, he said, and the water affected was 0.8% of the day’s total production.

DeFeyter said two consecutive test results must be clear before the advisory can be safely lifted. Each test takes 24 hours, he said, meaning the water could return to normal no earlier than the morning of September 4.

According to the city’s advisory, residents — including those who live on the Central Michigan University campus — should boil tap and tap water before consuming or using it. Bottled water is also recommended.

CMU’s announcement says classes, athletics and other scheduled events will not change, but the Student Activity Center pool will be closed. Showering and bathing with campus water is still safe, the announcement said, as long as the water is not ingested.

Students are recommended to bring their own water to campus, according to the announcement, and CMU will continue to offer additional guidance.

DeFeyter said Thursday’s turbidity issue was unrelated to reports of discolored water in college dorms. According to some Merrill Hall students, brown, black and yellow water has been coming out of their sinks and toilets since August 29.

For several students, the issue was resolved after running their faucets for a few moments. DeFeyter said this could again be used as a solution if the discolored water returned.

Students on the third floor also reported similar experiences – some had problems walking and stopping and others had no problems with their water.

According to DeFeyter, the problem in the dorms stemmed from an ongoing project to widen the intersection of Broomfield and Lincoln streets. A water main and fire hydrant were removed during the project. After the main line was reconnected and the water began to flow again, the sediment naturally present in the lines was disturbed, causing changes in the color of the water.

On August 30, the Office of Residence Life sent notifications via social media regarding the discolored water.

“The City of Mt Pleasant recently flushed a fire hydrant near campus which may result in discoloration of drinking water,” the notification reads. “The campus community can clean up any discolored water by running the faucet for a few moments until the water appears clear.”

Aaron Mills, director of university communications, said CMU isn’t sure the discolored water problem exists outside of Merrill Hall. Based on some posts from students on social media, he said the problem might be more widespread, but the university is looking into the matter.