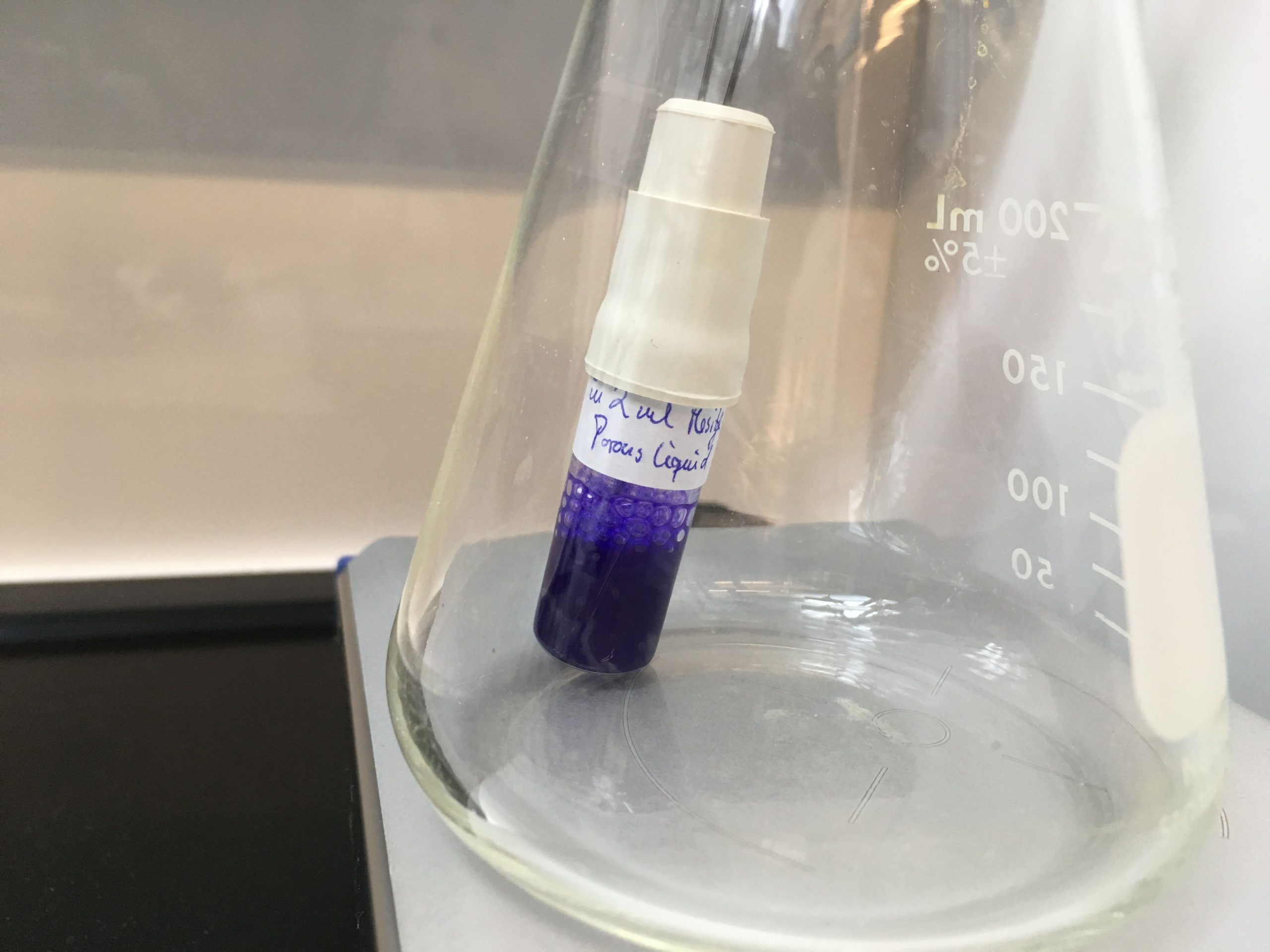 Simply put, distillation is the process of separating liquids from each other using a thermal process. This allows, on the one hand, the recovery of evaporated liquids. In addition, solvents can be separated from substances which are difficult to evaporate and which are then recovered by condensation. Although this traditional process is very efficient, it is nonetheless energy intensive.

Scientists at the German Institute of Technology in Karlsruhe (KIT) have now developed a process that could make distillation obsolete. All thanks to the new ‘porous liquids. ‘ This process involves floating nanoparticles in a solvent that separates gas molecules of different sizes from each other. This is accomplished when the empty pores of the particles have openings that only molecules of a certain size can pass through. The larger molecules stay on the outside and are thus separated from the smaller ones. The researchers explain that these porous liquids could be used directly, but they could also be made into membranes, “which are able to effectively separate propene from gaseous compounds as a raw material for widely used plastic.” polypropylene. “

Propene is largely extracted during the refining of crude oil or natural gas in a distillation process that separates it from other gases and purifies it. Propene is one of the most important raw materials for the production of polypropylene in the chemical industry. This plastic is mainly used for packaging materials and in the construction and automotive industries.

Greenhouse gases reduced by a factor of five

“In the technical literature, it is assumed that the separation of gases in petrochemicals using membranes would cost only a fifth of the energy required for distillation,” explains Dr Alexander Knebel, head of the junior research group at the Institute of Functional Interfaces (Institut fÃ¼r Funktionelle GrenzflÃ¤chendes, KIT), who carried out research at Leibniz UniversitÃ¤t Hannover in Germany and Saudi Arabia until 2019. â€œGiven the high amounts of propene required, this means that the release of huge amounts of greenhouse gases CO2 can be avoided. Thus, the petrochemical industry in particular could benefit from the use of membranes instead of distillation for the separation of propene. In tests by Knebel and colleagues, the throughput of the new membranes was at least three times that of existing materials.

Want to be inspired 365 days a year? Here is the opportunity. We offer you one “origin of innovation” per day in a compact Telegram message. Seven days a week, delivered around 8:00 p.m. CET. Direct from our newsroom. Subscribe here, it’s free!

The starting point of the research focused on the solid material ZIF-67 (Zeolitic Imidazole Framework). Its atoms form a metal-organic network with pores opening 0.34 nanometers wide. The researchers succeeded for the first time in “finely dispersing a metallo-organic framework in liquids such as cyclohexane, cyclooctane or mesitylene” by specifically modifying nanoparticles of ZIF-67 on the surface. Scientists dubbed the resulting scatter: ‘porous liquid‘.

Gaseous propene takes much longer to pass through a column filled with porous liquid than methane, Knebel continues. This is because propene is efficiently captured in the pores of nanoparticles, unlike smaller methane molecules. â€œWe want to exploit this property of dispersion in the future to produce liquid separation membranes. “

According to the researchers, porous liquids can also be used to produce solid separation membranes which have exceptionally advantageous properties. For example, in membranes made from a plastic substance and chemically modified ZIF-67, where the team was able to increase the proportion of modified ZIF-67 in the membrane to 47.5%. They did this without making him physically unstable. In a gaseous compound comprising equal parts of propene and propane, which was then passed through two membranes connected in series, the result was propene with a degree of purity of at least 99.9%. “Even though the two gas molecules are only 0.2 nanometers different,” the scientists say.

The deciding factor that determines the effectiveness of these membranes is that as many metal-organic particles as possible are evenly distributed throughout the plastic. And that the pores of the nanoparticles are not blocked by solvents during the manufacture of the membranes. In other words, that they remain empty. â€œWe were able to achieve both goals because we didn’t directly incorporate solid particles into the membrane, but rather proceeded through the porous liquids, even though it looks like a detour,â€ says Knebel.

However, the new process is not only interesting for the petrochemical industry. It can also be used in the production of alcohol. Basically, distillation could also be replaced in this area, says Knebel. â€œIn principle, it would be possible. Presumably, this could be done with a polymer membrane, and not by directly using a porous liquid. Then the process would be called pervaporation rather than penetration. “

However, the researcher predicts difficulties with alcoholic beverages such as gin, rum, etc. â€œWhat I find problematic here is that you would like fusel alcohols and highly volatile substances to have some influence on the taste / smell, which only happens during distillation,â€ he points out. -he. “With membrane distillation, they would be completely removed and the product would end up in the form of very pure alcohol.” But that’s also good if you wanted to make disinfectants, for example. â€œThe energy savings would be similar to what you can achieve with gas separation. “

Knebel and colleagues from Leibniz University in Hanover, King Abdullah University of Science and Technology (Saudi Arabia) and Deutsches Institut fÃ¼r Kautschuktechnologie (German Institute of Rubber Technology) reported on the results of their research in the academic journal Natural materials.